EVBodrum in The New York Times '20 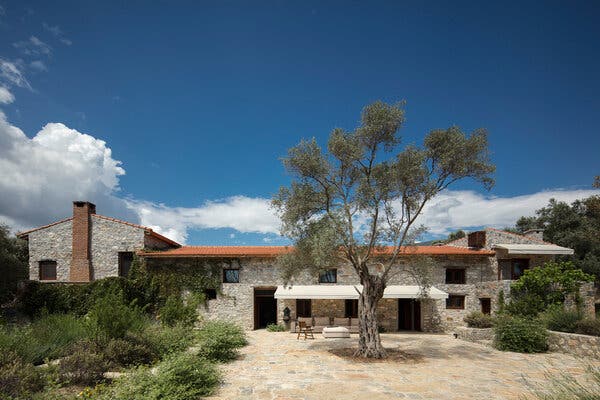 House Hunting in Turkey: A Spruced-Up Olive-Oil Factory for $1.8 Million

In the Aegean coastal area of Bodrum, buyers are arriving from cities near and far, propelled by the pandemic and the struggling Turkish lira.

This restored, 19th-century olive-oil factory is in a rural section of Milas, an ancient city in Mugla Province, on the southwestern coast of Turkey. Rescued from disrepair by its current owners in 2015, it’s now a residential compound on 2.5 acres of active gardens and farmland. Its sleek interiors contrast with original stone walls and rough-hewn timber.

A hulking, 100-year-old mechanical olive press, restored by the owners with parts sourced from its original British manufacturer, anchors an airy, modern great room. “These old factories are mostly broken down and in disuse, so this is definitely an unusual property,” said Heike Tanbay, managing director of Engel & Völkers Bodrum and the listing agent. “This is a very rural area, so it’s a real surprise when you come in.”

Built in 1850, the eight-bedroom, 10-bathroom residence sprawls across 8,255 square feet, including an attached two-bedroom guesthouse. Original stone walls surround the property and demarcate the grounds. The stone-inlaid driveway leads to the home’s covered front patio and main entrance. Inside, the original olive-oil production room has been transformed into a high ceilinged great room with concrete slab floors. A 750-square-foot commercial kitchen, equipped to serve as many as 150 guests, connects to the great room. 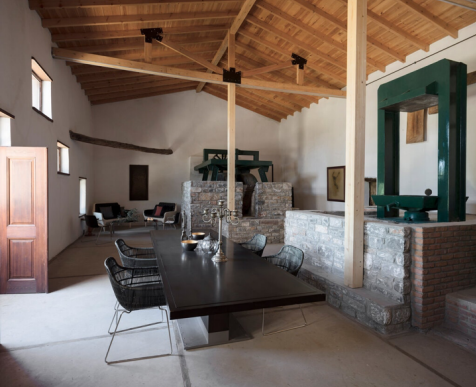 The roof, floors and mechanicals have been replaced throughout the home. “Whatever they changed, they chose good quality,” Ms. Tanbay said. Sirio Pellegrini, one of two business partners who restored the property and live there now, said the restoration cost more than $600,000. “We kept everything as original as possible, including the walls and old woods,” he said. “But the infrastructure of the house is new,” including a generator that carries the home through the region’s occasional power outages.

The home’s warren of living spaces extends in an “L” shape from two sides of the great room, ensuring privacy even when guests fill the home, Ms. Tanbay said. Two small rooms behind the great room function as private living rooms. A gallery has a library and reading lounge, and another room is equipped as a recording studio; Bulent Tercanli, an artist and producer known as DJ Tutan, is Mr. Pellegrini’s business partner and co-resident. The owners have separate bedrooms, with en suite bathrooms and kitchenettes, on opposite sides of the property. “There are eight bedrooms listed, but you could make 13 in total if you convert these additional rooms,” Ms. Tanbay said.

Toward the rear of the property, a large room with a fireplace has been converted to an office, with built-in bookshelves and original wood ceilings reinforced with steel beams. The office opens to a large wood deck and swimming pool. The owners also built an enclosed sunroom that overlooks the pool, with a retractable ceiling and sliding glass doors.

Two guests suites, one with a kitchenette, have a separate entrance at the front of the property, “almost like a little hotel,” Ms. Tanbay said.

The grounds produce summer vegetables, herbs such as rosemary and thyme, and pine nuts, which the owners package and sell. Mr. Pellegrini also wholesales bottled olive oil and tomato sauce produced on site. “We’re calling this ‘sustainable living,’ which has become very appealing for people from cities during the pandemic,” Ms. Tanbay said. “It’s suitable to run as a professional organic farm, alternative business space, or a holiday home.”

The ancient city of Milas “is a very prominent summer holiday destination,” Ms. Tanbay said, though this home is in a quieter area. The Aegean coast city of Iassos, with 4,000-year-old historic sites in its ancient quarter, is a 30-minute drive, and Milas Bodrum Airport is about 20 minutes. The Aegean port city of Bodrum, with about 30,000 residents, is 30 miles southwest.

You can access the full article published by Michael Kaminer on The New York Times website on Nov. 18, 2020, at the link below.